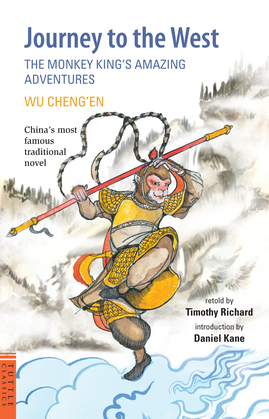 Journey to the West

de Cheng'en,Wu (Auteur)
Fiction Classiques
EPUB
Prêts illimités, Un à la fois
Détails
China's most popular traditional novel, Journey to the West is the thrilling story of the Monkey King and his epic quest, with his trusted companions, to redeem himself. They face fantastic foes, demons and monsters during their amazing adventures traveling to the Western paradise.

No matter what obstacle was put before him, the clever, wily Monkey King always got what he wanted-unimaginable strength, eternal life, even his own position in the Celestial Realm with the gods. More than anything else, though, the Monkey King loved mischief and rule-breaking and was sure he was the most powerful creature in the world.

But after defeat and punishment for his tricks, the Monkey King found himself wanting some things he never expected: to be disciplined and good enough to help the monk Hsuan Zhang on his mission to bring Buddhist Scriptures-and enlightenment-to China.

Readers of all ages will thrill to Timothy Richard's retelling of the Monkey King's exploits-whether in the Dragon King's underwater castle, the Halls of the Dead or the palace of Buddha himself-and find themselves captivated as the Monkey King joins Hsuan Zhang and their companions the Dragon Horse, the Monk Sand and the equally mischievous Pig on the dangerous trek West. Despite the tale's ancient origins, Journey to the West proves as fresh and engaging an adventure as anything written today.