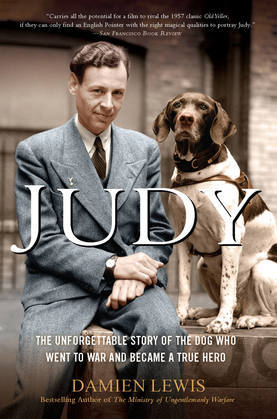 Judy: The Unforgettable Story of the Dog Who Went to War and Became a True Hero

British bestselling author Damien Lewis is an award-winning journalist who has spent twenty years reporting from war, disaster, and conflict zones. Now Lewis brings his first-rate narrative skills to bear on the inspiriting tale of Judy--an English pointer who perhaps was the only canine prisoner of war.

After being bombed and shipwrecked repeatedly while serving for several wild and war-torn years as a mascot of the World War II Royal Navy Yangtze river gunboats the Gnat and the Grasshopper, Judy ended up in Japanese prisoner of war camps in North Sumatra. Along with locals as slave labor, the American, Australian, and British POWs were forced to build a 1,200-mile single-track railroad through the most horrifying jungles and treacherous mountain passes. Like the one immortalized in the film The Bridge on the River Kwai, this was the other death-railroad building project where POWs slaved under subhuman conditions.

In the midst of this living hell was a beautiful and regal-looking liver and white English pointer named Judy. Whether she was scavenging food to help feed the starving inmates of a hellish Japanese POW camp, or by her presence alone bringing inspiration and hope to men, she was cherished and adored by the Allied servicemen who fought to survive alongside her.

Judy's uncanny ability to sense danger, matched with her quick thinking and impossible daring saved countless lives. More than a close companion she shared in both the men's tragedies and joys. It was in recognition of the extraordinary friendship and protection she offered amidst the unforgiving and savage environment of a Japanese prison camp in Indonesia that she gained her formal status as a POW. From the author of The Dog Who Could Fly and the co-author of Sergeant Rex and It's All About Treo comes one of the most heartwarming and inspiring tales you will ever read.