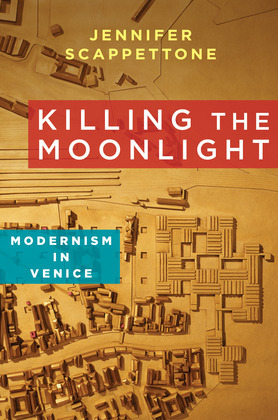 Killing the Moonlight: Modernism in Venice

by Jennifer Scappettone (Author)
Non-Fiction Literary essay
EPUB
unlimited loans, One at a time
Details
As a city that seems to float between Europe and Asia, removed by a lagoon from the tempos of terra firma, Venice has long seduced the Western imagination. Since the 1797 fall of the Venetian Republic, fantasies about the sinking city have engendered an elaborate series of romantic clichés, provoking conflicting responses: some modern artists and intellectuals embrace the resistance to modernity manifest in Venice’s labyrinthine premodern form and temporality, whereas others aspire to modernize by “killing the moonlight” of Venice, in the Futurists’ notorious phrase.

Spanning the history of literature, art, and architecture—from John Ruskin, Henry James, and Ezra Pound to Manfredo Tafuri, Italo Calvino, Jeanette Winterson, and Robert Coover—Killing the Moonlight tracks the pressures that modernity has placed on the legacy of romantic Venice, and the distinctive strains of aesthetic invention that resulted from the clash. In Venetian incarnations of modernism, the anachronistic urban fabric and vestigial sentiment that both the nation-state of Italy and the historical avant-garde would cast off become incompletely assimilated parts of the new. Killing the Moonlight brings Venice into the geography of modernity as a living city rather than a metaphor for death, and presents the archipelago as a crucible for those seeking to define and transgress the conceptual limits of modernism. In strategic detours from the capitals of modernity, the book redrafts the confines of modernist culture in both geographical and historical terms.