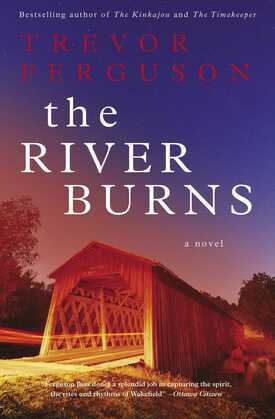 Trevor Ferguson, one of Canada?s most acclaimed writers, returns with The River Burns, his long-awaited new novel.

The River Burns tells the story of a small town in crisis, the mistakes people make, and the courage it takes to heal a community after a horrific act of destruction.

Wakefield is a small town where a unique collection of longstanding citizens has lived mostly in harmony, accepting of each other?s foibles. But underneath the picture perfect exterior a battle rages between those who wish to preserve the historic single-lane covered bridge across the river, and the loggers who want it replaced with a modern alternative. As the days pass with no change in the dispute, tensions begin to boil over, friends turn against one another, and the town seethes with potential violence.

Family man and second-generation logger Denny O?Farrell has been leading the charge to modernize the bridge. When the bureaucratic route fails to produce results, Denny and his friends need a new plan of action. But local police officer Ryan O?Farrell, Denny?s brother, is very worried about exactly how much Denny and friends are willing to risk in order to win the war. Swept up into the dispute, lawyer Raine Tara-Anne Cogshill, a newcomer hiding from her big-city past, hasn?t bargained on getting caught up in a summer of violence.