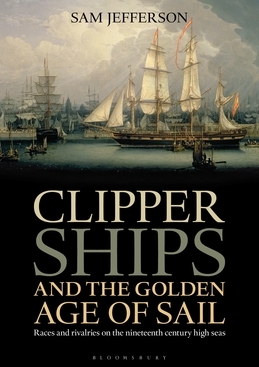 Clipper Ships and the Golden Age of Sail

In the era of commercial sail, clipper ships were the ultimate expression of speed and grace. Racing out to the gold fields of America and Australia, and breaking speed records carrying tea back from China, the ships combined beauty with breathtaking performance.

With over 200 gorgeous paintings and illustrations, and thrilling descriptions of the adventures and races on the water, this beautiful book brings the era vividly to life.

The origins of the clippers - from the gold rush to the tea trade
A hell ship voyage with 'Bully' Waterman, one of the most successful and notorious captains of the era
Marco Polo, the fastest ship in the world - her rise to prominence and subsequent decline
Mary Patten's battle with Cape Horn - a lady captain takes charge in a very male world
Mutiny aboard the 'wild boat of the Atlantic'
The great China tea race of 1866 - an amazingly close race across the world, only decided in the final few miles
The Sir Lancelot defies the odds - her eccentric captains and rivalry with the legendary Thermopylae
The Cutty Sark's longest voyage

First-hand accounts, newspaper reports and log entries add fascinating eyewitness detail, whilst the stunning images show how the designs of these thoroughbreds developed over the years.

A wonderful read and worthy celebration of these racehorses of the sea.