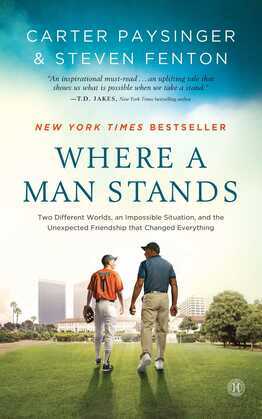 Where a Man Stands

When Beverly Hills High School welcomed a skinny boy from the other side of the tracks, no one knew just how life-changing the decision would be, not just for Carter Paysinger but for all of Beverly Hills.

Carter grew up hearing his parents say, ?Don?t just strive to be good. Always strive to be great.? He dreamed of finding greatness in playing professional baseball or becoming a black Donald Trump, but fate had different plans and, ultimately, he found his calling as a teacher and coach at the school that once embraced him, becoming a rock for the innumerable kids who came seeking an ear to listen or a shoulder to cry on. One such kid, a scrappy Jewish boy from a prominent family, would change the course of Carter?s life. His name was Steven Fenton.

Twenty years later, as Beverly Hills High fell into disarray?with principals hired and fired and families fleeing the school?as well as his own life coming apart, Carter ran into Steven Fenton again. Together, they found renewed passion and hope to fight for their school and test the limits of what community means. But when Steven convinced Carter to throw his hat into the ring as principal, the progressive Beverly Hills suddenly thought that its winningest and most beloved coach didn?t fit the profile for the Beverly Hills image. It was the beginning of a long road, but Carter could hear his father saying, ?Don?t listen to those voices. Do what you have to do.?

Filled with hope, triumph, and the struggles that come to define us, Where a Man Stands is a beautiful fish-out-of-water story about the families formed in unlikely places and how, in the end, where you stand, and with whom, and for what, matters as much as anything.