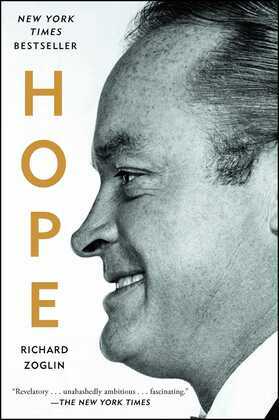 ?Revelatory?fascinating? (The New York Times): The first definitive biography of Bob Hope, featuring exclusive and extensive reporting that makes the persuasive case that he was the most important entertainer of the twentieth century.

With his topical jokes and his all-American, brash-but-cowardly screen character, Bob Hope was the only entertainer to achieve top-rated success in every major mass-entertainment medium of the century, from vaudeville in the 1920s all the way to television in the 1950s, 1960s, and 1970s. He virtually invented modern stand-up comedy. Above all, he helped redefine the very notion of what it means to be a star: a savvy businessman, an enterprising builder of his own brand, and a public-spirited entertainer whose Christmas military tours and unflagging work for charity set the standard for public service in Hollywood.

As Richard Zoglin shows in this ?entertaining and important book? (The Wall Street Journal), there is still much to be learned about this most public of figures, from his secret first marriage and his stint in reform school, to his indiscriminate womanizing and his ambivalent relationships with Bing Crosby and Johnny Carson. Hope could be cold, self-centered, tight with a buck, and perhaps the least introspective man in Hollywood. But he was also a tireless worker, devoted to his fans, and generous with friends.

?Scrupulously researched, likely definitive, and as entertaining and as important (to an understanding of twentieth- and twenty-first-century pop culture) as its subject once genuinely was? (Vanity Fair), Hope is both a celebration of the entertainer and a complex portrait of a gifted but flawed man. ?A wonderful biography,? says Woody Allen. ?For me, it?s a feast.?