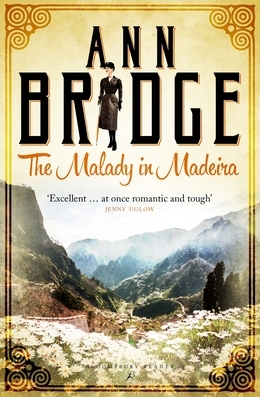 The Malady in Madeira

The last thing recently widowed Julia Probyn expects to find on the lush and charming island of Madeira is a clue to her husband's mysterious death, for Colonel Jamieson perished somewhere in the wilds of Central Asia while on a top-secret mission for British Intelligence. No sooner does Julia arrive at Madeira with her infant son and his devoted Nanny, however, than a series of strange, sinister, but apparently unconnected events begins thrusting itself upon her.

Displaying her usual intuitive flair for deduction, Julia soon concludes that, for some reason, the Russians are experimenting with a powerful new chemical on Madeira's wild sheep. But why? And why was she told that her husband died "because he went out without wearing his respirator"?

A small Madeiran peasant boy shows the same lethargic symptoms as the sheep, and-Julia suddenly realizes-as her husband had himself displayed shortly before walking into a Soviet ambush half a world away. Has she stumbled upon a testing ground for nerve gas in Madeira? And is that what her husband's last mission was all about? Keeping a firm grip on her nerves and her imagination, Julia forces herself to learn the exact and painful details surrounding the abortive mission and her husband's death.

Once in possession of the few tenuous facts that anyone in London knows and can tell about Colonel Jamieson's death, Julia summons her cousin, Colin Monro, to Madeira and, together, they blow the entire Russian plot wide open. Here is high adventure interwoven with all the sights, sounds and scenes of fecund Madeira in a story as exotic and spellbinding as Ann Bridge's many readers have come to expect from her gifted pen.