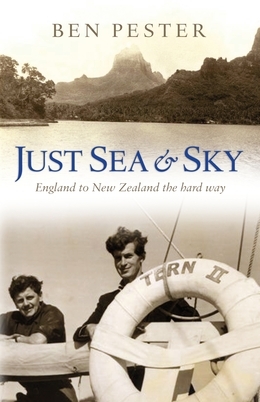 This charming account of the voyage of two men in a small boat half way
round the world from Plymouth to New Zealand in 1953 is a rare insight into a time, not long ago, when
sailors had no GPS, electronics, radio or any of the mod cons that we
take for granted today. Without lifejacket or a liferaft, they 'just took what came along', hand steering all the way, navigating by sextant, hand-cranking their engine and using oil lamps for light at night and for navigation. Sailors will be staggered how primitive conditions were only a few decades ago, even though it was the norm at the time.

Part travelogue and part adventure story, the two friends encountered drunken harbourmasters, the mafia, the legacy of slavery and lost civilisations in the Pacific. Beautifully written, vivid in its descriptions of the two men's exploits ashore and on board, this quirky and entertaining book will be a fascinating read for sailors and non-sailors alike.

'A compelling story - I feel like I have sailed with them.' Yachting Monthly