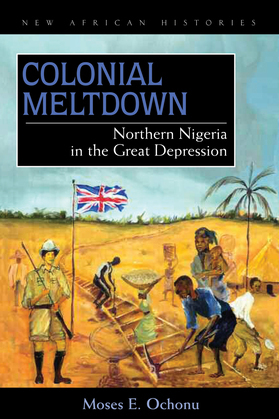 Historians of colonial Africa have largely regarded the decade of the Great Depression as a period of intense exploitation and colonial inactivity. In Colonial Meltdown, Moses E. Ochonu challenges this conventional interpretation by mapping the determined, at times violent, yet instructive responses of Northern Nigeria's chiefs, farmers, laborers, artisans, women, traders, and embryonic elites to the British colonial mismanagement of the Great Depression. Colonial Meltdown explores the unraveling of British colonial power at a moment of global economic crisis.

Ochonu shows that the economic downturn made colonial exploitation all but impossible and that this dearth of profits and surpluses frustrated the colonial administration which then authorized a brutal regime of grassroots exactions and invasive intrusions. The outcomes were as harsh for Northern Nigerians as those of colonial exploitation in boom years.

Northern Nigerians confronted colonial economic recovery measures and their agents with a variety of strategies. Colonial Meltdown analyzes how farmers, women, laborers, laid-off tin miners, and NorthernNigeria's emergent elite challenged and rebelled against colonial economic recovery schemes with evasive trickery, defiance, strategic acts of revenge, and criminal self-help and, in the process, exposed the weak underbelly of the colonial system.

Combined with the economic and political paralysis of colonial bureaucrats in the face of crisis, these African responses underlined the fundamental weakness of the colonial state, the brittleness of its economicmission, and the limits of colonial coercion and violence. This atmosphere of colonial collapse emboldened critics of colonial policies who went on to craft the rhetorical terms on which the anticolonial struggle of the post-World War II period was fought out.

In the current climate of global economic anxieties, Ochonu's analysis will enrich discussions on the transnational ramifications of economic downturns. It will also challenge the pervasive narrative of imperial economic success.