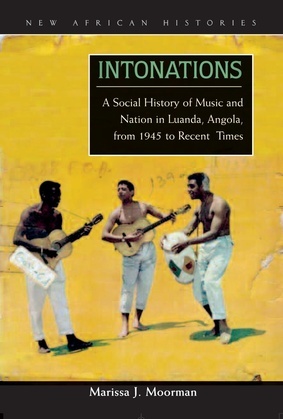 Intonations: A Social History of Music and Nation in Luanda, Angola, from 1945 to Recent Times

Intonations tells the story of how Angola's urban residents in the late colonial period (roughly 1945-74) used music to talk back to their colonial oppressors and, more importantly, to define what it meant to be Angolan and what they hoped to gain from independence. A compilation of Angolan music is included in CD format.

Marissa J. Moorman presents a social and cultural history of the relationship between Angolan culture and politics. She argues that it was in and through popular urban music, produced mainly in the musseques (urban shantytowns) of the capital city, Luanda, that Angolans forged the nation and developed expectations about nationalism. Through careful archival work and extensive interviews with musicians and those who attended performances in bars, community centers, and cinemas, Moorman explores the ways in which the urban poor imagined the nation.

The spread of radio technology and the establishment of a recording industry in the early 1970s reterritorialized an urban-produced sound and cultural ethos by transporting music throughout the country. When the formerly exiled independent movements returned to Angola in 1975, they found a population receptive to their nationalist message but with different expectations about the promises of independence. In producing and consuming music, Angolans formed a new image of independence and nationalist politics.