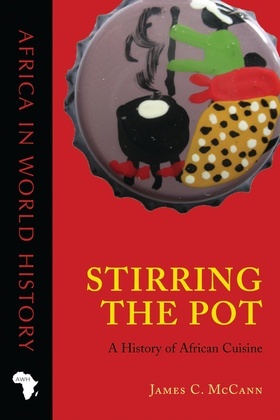 Stirring the Pot: A History of African Cuisine

Africa's art of cooking is a key part of its history. All toooften Africa is associated with famine, but in Stirring the Pot,James C. McCann describes how the ingredients, the practices,and the varied tastes of African cuisine comprise a body of historically gendered knowledge practiced and perfected in householdsacross diverse human and ecological landscape. McCannreveals how tastes and culinary practices are integral to the understanding of history and more generally to the new literature on food as social history.

Stirring the Pot offers a chronology of African cuisine beginning in the sixteenth century and continuing from Africa's original edible endowments to its globalization. McCann traces cooks' use of new crops, spices, and tastes, including New World imports like maize, hot peppers, cassava, potatoes, tomatoes, and peanuts, as well as plantain, sugarcane, spices, Asian rice, and other ingredients from the Indian Ocean world. He analyzes recipes, not as fixed ahistorical documents,but as lively and living records of historical change in women's knowledge and farmers' experiments. A final chapter describes in sensuous detail the direct connections of African cooking to New Orleans jambalaya, Cuban rice and beans, and the cooking of African Americans' "soul food."

Stirring the Pot breaks new ground and makes clear the relationship between food and the culture, history, and national identity of Africans.