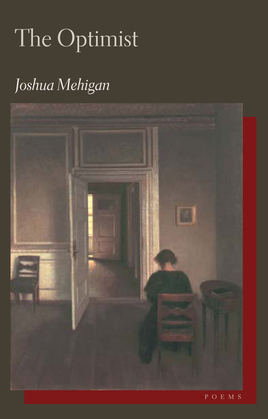 In Joshua Mehigan's award-winning poetry, one encounters a lucid, resolute vision driven by an amazing facility with the metrical line. Most of the poems in The Optimist unapologetically employ traditional poetic technique, and, in each of these, Mehigan stretches the fabric of living language over a framework of regular meter to produce a compelling sonic counterpoint.

The Optimist stares at contemporary darkness visible, a darkly lit tableau that erases the boundary between the world and the perceiving self. Whether narrative or lyric, dramatic or satirical, Mehigan's poems explore death, desire, and change with a mixture of reason and compassion.

"The world is given its due in these poems, but its due is the subjective voice making 'objective' reality into the reality of art. To do this Mehigan accesses a tradition of voices-the echoes in The Optimist are, to name a few, of Frost, Robinson, Kees, and Justice; and more in terms of point of view, Bishop and Jarrell-to form with great integrity his own. It isn't that Mehigan is concerned more with what's outside himself than inside; nor merely that he travels the highway between the two with such humility and grace. It's also that these voices, this great tradition, infuses his line with what the best verse, metrical or free, must have: wonder."