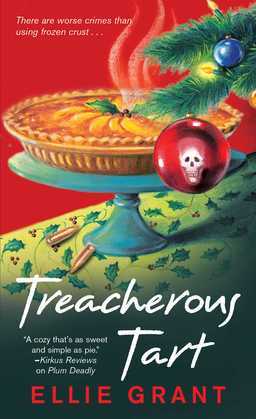 In this second charming novel in the Pie Shop cozy mystery series, a modern-day Lothario is shot dead, and it's up to Maggie to clear her aunt and partner-in-pie from the suspect list.

It's Christmastime at Pie in the Sky, Aunt Clara's pie shop, and she has a new beau, Donald Wickerson, who loves her Marvelous Mince Pies.

Unfortunately, it seems that this holiday, Donald might only be interested in Aunt Clara for her money. Ryan and Maggie research his background and find he's had several wives who met with unfortunate "accidents" that left him wealthier. Now they have to convince Aunt Clara that her boyfriend is after more than just her pie recipes.

When Donald stumbles into Pie in the Sky and dies after being shot, Aunt Clara is devastated--and also a suspect, since everyone in Durham knows about Donald from Ryan's newspaper article. Now Maggie and Ryan will have to prove that someone else in the long list of people he'd wronged finally got the courage to end his life.