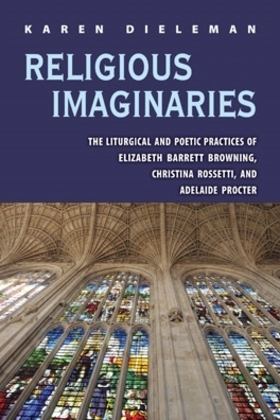 Religious Imaginaries explores liturgical practice as formative for how three Victorian women poets imagined the world and their place in it and, consequently, for how they developed their creative and critical religious poetics. In doing so, this new study rethinks several assumptions in the field: that Victorian women's faith commitments tend to limit creativity; that the contours of church experiences matter little for understanding religious poetry; and that gender is more significant than liturgy in shaping women's religious poetry.

Exploring the import of bodily experience for spiritual, emotional, and cognitive forms of knowing, Karen Dieleman explains and clarifies the deep orientations of different strands of nineteenth-century Christianity, such as Congregationalism's high regard for verbal proclamation, Anglicanism and Anglo-Catholicism's valuation of manifestation, and revivalist Roman Catholicism's recuperation of an affective aesthetic. Looking specifically at Elizabeth Barrett Browning, Christina Rossetti, and Adelaide Procter as astute participants in their chosen strands of Christianity, Dieleman reveals the subtle textures of these women's religious poetry: the different voices, genres, and aesthetics they create in response to their worship experiences. Part recuperation, part reinterpretation, Dieleman's readings highlight each poet's innovative religious poetics.

Dieleman devotes two chapters to each of the three poets: the first chapter in each pair delineates the poet's denominational practices and commitments; the second reads the corresponding poetry. Religious Imaginaries has appeal for scholars of Victorian literary criticism and scholars of Victorian religion, supporting its theoretical paradigm by digging deeply into primary sources associated with the actual churches in which the poets worshipped, detailing not only the liturgical practices but also the architectural environments that influenced the worshipper's formation. By going far beyond descriptions of various doctrinal positions, this research significantly deepens our critical understanding of Victorian Christianity and the culture it influenced.