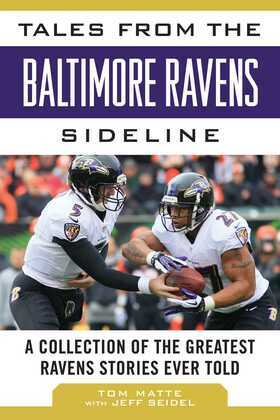 Tales from the Baltimore Ravens Sideline

Tales from the Baltimore Ravens Sideline examines the history of the Baltimore football franchise since their move from Cleveland to Baltimore in 1996. The book chronicles how the team built itself into the champions of Super Bowl XXXV with what many believe to have been the National Football League's best defense of all time. Former Baltimore football great Tom Matte also details how Ray Lewis became the league's best defender, how Brian Billick became one of the best known coaches, how the franchise rebuilt itself after Super Bowl V to be a contending team once again, and how they have become the most popular sports franchise in Baltimore, adding two more Super Bowls in the 21st century. This book is a perfect gift for loyal Ravens fans!