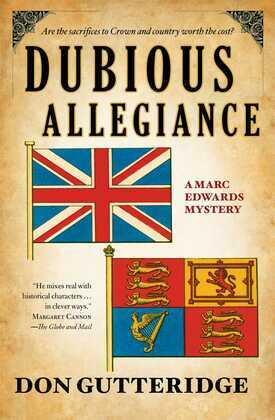 The fourth novel in the action-packed Marc Edwards mystery series, set during the rebellions of 1830s Upper Canada.

Autumn 1837: the provinces of Upper and Lower Canada are on the eve of open revolt. Lieutenant Marc Edwards has been sent with a force of British soldiers to subdue the increasingly hostile French rebels. But as the smoke from the battle clears and political pressures build, Marc begins to question whether the sacrifices he has made in the name of Crown and country have been worth the cost.

On his return trip to Toronto, Marc is accompanied by a group of seemingly innocent civilians. But as tensions in the provinces escalate and personal grievances within the group arise, it becomes clear that not everyone Marc is traveling with is who he appears to be. Soon, mysterious death threats are issued and Marc finds himself the target of an unknown assassin. And when a member of the group is found murdered in the woods, Marc realizes that he may have more than one killer to worry about.