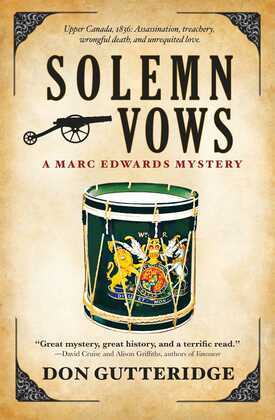 A search for a man armed with a rifle that hasn’t been shot since the war of 1812 leads to an investigation that takes Marc Edwards from a newspaper office into the mansions of the Family Compact, and even to the local brewery, as the clues he uncovers point closer and closer to home.

Now lieutenant in charge of security at Government House in Toronto, Marc Edwards is eager for action in both his personal and professional life. His letters to Beth Smallman in Crawford Corners have gone unanswered and writing speeches for Lieutenant Governor Francis Bond Head is not the stuff of excitement. Then, during an election speech by Bond Head, a shot fells a government minister sitting just behind him and Marc on the hustings. Marc’s troop gallops after an armed man who flees the scene, killing him when he points his rifle at Marc’s chest. Then they discover that the rifle has not been fired since the war of 1812.

Mortified by his troop’s mistake, Marc accepts the help of Horatio Cobb, one of Toronto’s three constables in its brand new police force. He also accepts the affections of Eliza Dewart-Smythe, who is almost, but not quite, as beguiling as Beth. His investigation takes him from William Lyon Mackenzie’s newspaper office into the mansions of the Family Compact, and to the local brewery, as the clues he uncovers point closer and closer to home.