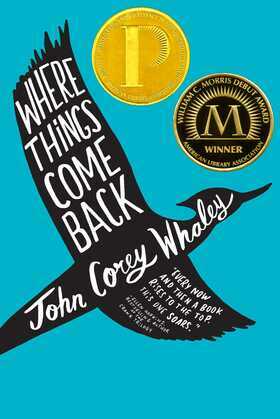 Where Things Come Back

Winner of the 2012 Michael L. Printz and William C. Morris Awards, this poignant and hilarious story of loss and redemption ?explores the process of grief, second chances, and even the meaning of life? (Kirkus Reviews).

In the remarkable, bizarre, and heart-wrenching summer before Cullen Witter?s senior year of high school, he is forced to examine everything he thinks he understands about his small and painfully dull Arkansas town. His cousin overdoses; his town becomes absurdly obsessed with the alleged reappearance of an extinct woodpecker; and most troubling of all, his sensitive, gifted fifteen-year-old brother, Gabriel, suddenly and inexplicably disappears.
Meanwhile, the crisis of faith spawned by a young missionary?s disillusion in Africa prompts a frantic search for meaning that has far-reaching consequences. As distant as the two stories initially seem, they are woven together through masterful plotting and merge in a surprising and harrowing climax.
This extraordinary tale from a rare literary voice finds wonder in the ordinary and illuminates the hope of second chances.