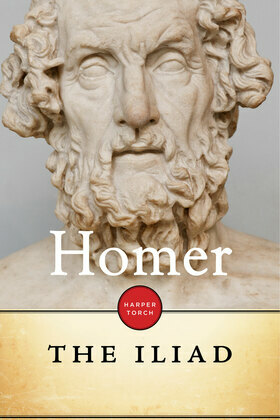 by Homer (Author)
Fiction Classics
EPUB
26 Loans, One at a time
Details

It is the tenth year of the Trojan War. The Greek allies have laid siege to the city of Troy, but the leaders of the Greek factions are beginning to turn on one another. When Agamemnon, the king of Mycenae, angers Achilles, leader of the Myrmidons, the gods begin to intervene more directly in the conflict, and the war becomes even more dangerous for the heroes of Greece and Troy.

The Iliad is attributed to the poet Homer and is the earliest surviving work of Western literature. Composed sometime around the eighth century BC, the ancient Greek poem has since been translated into many languages and serves as an important source of information on ancient Greek culture and mythology. The story of the Trojan War was adapted for the 2004 film Troy, which starred Brad Pitt and Eric Bana.

HarperTorch brings great works of non-fiction and the dramatic arts to life in digital format, upholding the highest standards in ebook production and celebrating reading in all its forms. Look for more titles in the HarperTorch collection to build your digital library.