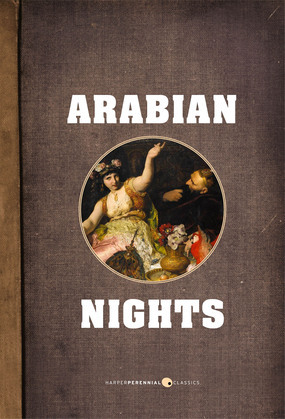 by Anonymous (Author)
Fiction Classics
EPUB
26 Loans, One at a time
Details

Although there are many editions of The Arabian Nights featuring a varying number of tales, all of the different editions are based on the same framing story about the Persian ruler, Shahryar, and his wife, Scheherazade. After being betrayed by one of his wives, Shahryar becomes untrusting, and though he continues to marry, executes each of his wives shortly thereafter. When he finally marries the clever Scheherazade, she tells him a tale on the night of their wedding, but refuses to finish it until the next night, ensuring her safety while the king waits for the conclusion of the story.

The Arabian Nights, or One Thousand and One Nights is a collection of tales compiled over several centuries during the Islamic Golden Age. Although The Arabian Nights has been widely influential in both Arabic and Western culture, it is probably most famous for inspiring adaptations of the stories of Aladdin, Ali Baba, and Sinbad. However, the stories “Aladdin’s Wonderful Lamp,” “Ali Baba and the Forty Thieves,” and “The Seven Voyages of Sinbad the Sailor,” were not included in the Arabic versions of The Arabian Nights, and were only added later by European translators.

This edition of The Arabian Nights contains more than thirty of the most influential and canonical stories of the original Arabic version of Arabian Nights, including “The Hunchback’s Tale” and “The Porter and the Three Ladies of Baghdad.”