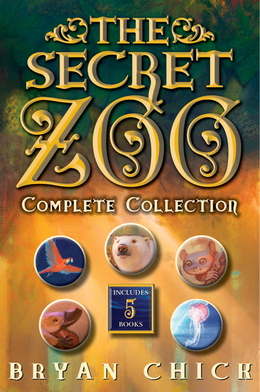 by Bryan Chick (Author)
Fiction
EPUB
26 Loans, One at a time
Details

Five complete books in one! Noah, Megan, Richie, and Ella are the Action Scouts: friends whose tree house overlooks the Clarksville City Zoo. When they discover a magical world hidden within the zoo, they are swept away on an adventure in which penguins can fly, a mysterious figure lurks in the shadows, and the scouts are enlisted to help Mr. Darby, who is in charge of the Secret Zoo.

The Secret Zoo: Noah, his sister Megan, and their best friends, Richie and Ella, live next door to the zoo. Megan is the first to notice the puzzling behavior of some of the animals. One day Megan disappears, and her brother and their friends realize it's up to them to find her. Once inside, will they discover there's much more to the Clarksville City Zoo than they could ever have guessed?

The Secret Zoo: Secrets and Shadows: Noah and his must train to become Crossers, members of a secret society who freely travel to the Secret Zoo and back, helping to defend its borders. But now that the monstrous sasquatches are on the loose and the evil Shadowist is plotting destruction, will Noah, Megan, Ella, and Richie have what it takes to survive?

The Secret Zoo: Riddles and Danger: Will the scouts be able to fight against the dangerous sasquatches who have escaped the zoo and threaten their town?

The Secret Zoo: Traps and Specters: On Halloween night, Noah and his friends must battle terrifying sasquatches that have attacked their own elementary school. Little do they know the sasquatches are a trap! When DeGraff captures three of Noah's friends, can the kids ally with their rivals in order to save every person and animal in the zoo—all while dodging the town's police?

The Secret Zoo: Raids and Rescues: Even in the Secret Zoo, there are dangers . . . and forbidden places. When the scouts' friends are held in the off-limits sector—a never-ending maze of aquariums—Noah, Megan, Richie, and Ella must be at their most courageous.