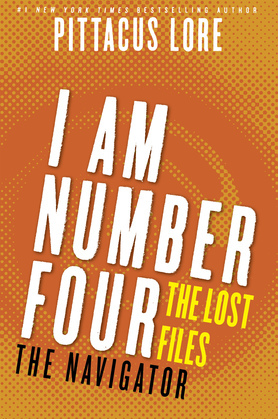 In this astonishing one-hundred-page companion novella to the New York Times bestselling I Am Number Four series, meet Lexa, a Loric hacker whose unrivaled skills helped her narrowly escape her doomed planet, and who's been hiding on Earth ever since.

Lexa was never part of the Elders' plan. She had no idea the Garde children were being evacuated to our planet. But when the Mogadorian attack began, she used her expertise to get an old spaceship in a museum operational once more and became irrevocably entwined with the Garde's fate. In addition to her friend, a pack of Chimæra, and a Cêpan named Crayton, her relic of a ship also carried Ella, the tenth Garde.

With all of their Cêpans now gone, the Garde think they are the last of the Loric people. But they are wrong. They have forgotten all about the crew that brought them to Earth. Where have the pilots for both ships been all these years? And why haven't they joined in the fight against the Mogs? In The Navigator, discover the truth behind their escape from Lorien and what happened to them after they arrived on our planet.