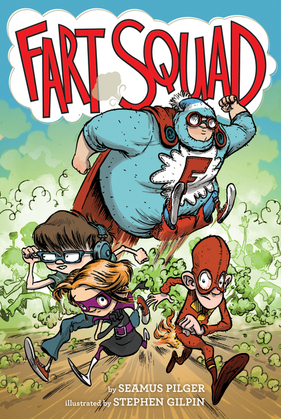 It was an average day at Harry Buttz Elementary until . . . KABLAM! The five-bean burritos churning in Darren Stonkadopolis's stomach exploded in a fart so volcanic it melted his desk seat, knocked out his whole class, and got him sent to the nurse—and he's not alone.

Something fishy is going on in Buttzville. And it's up to Darren and his three farting friends to combine their potty powers to get to the bottom of this evil plot—before it's too late. With their scent-sei, Janitor Stan, at their side, the Fart Squad has to learn to harness the powers between their butt cheeks. And then let it RIIIP.

"A flagrant romp. Not to be passed!"—The New York Toots
"A cut above the rest."—StinkyCheese.com
"If you haven't caught wind of Fart Squad yet, don't let this one go!" —Rude News
"We've been dealt a winner!"—SmeltIt.blog.com