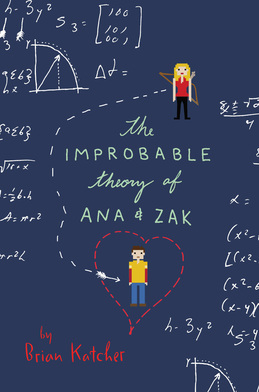 The Improbable Theory of Ana and Zak

Perfect for fans of Nick and Norah's Infinite Playlist and The Statistical Probability of Love at First Sight, The Improbable Theory of Ana and Zak is Stonewall Award-winning author Brian Katcher's hilarious he said/she said romance about two teens discovering themselves on an out-of-this-world accidental first date at a sci-fi convention.

When Ana Watson's brother ditches a high school trip to run wild at Washingcon, type-A Ana knows that she must find him or risk her last shot at freedom from her extra-controlling parents.

In her desperation, she's forced to enlist the last person she'd ever want to spend time with—slacker Zak Duquette—to help find her brother before morning comes.

But over the course of the night, while being chased by hordes of costumed Vikings and zombies, Ana and Zak begin to open up to each other. Soon, what starts as the most insane nerdfighter manhunt transforms into so much more. . . .