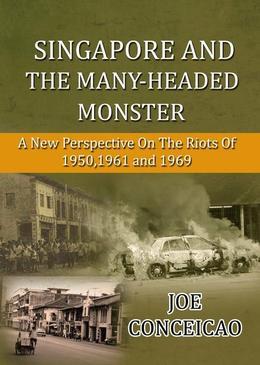 Former Member of Parliament and diplomat Joe Conceicao (b. 1924) has chronicled the three occasions in Singapore history where the many-headed monster (riots) had been sighted: the three race riots that erupted in 1950, 1964 and 1969. The first riot was sparked by the custody battle for Maria Hertogh, which was fought by her Dutch birth parents and her Malay-Muslim adoptive family, who had raised Maria as a Muslim.

In December 1950, the British-administered court ruled in favour of Maria's birth parents, a decision which greatly angered the Muslim community. Europeans, Eurasians and Christians were attacked in the outbreak of violence that followed. The beast reared its head again in July 1964 during a special event organised to mark Prophet Mohammad's birthday. Goaded by ultra-nationalists in Singapore UMNO, who had been agitating for special rights for the Malays in Singapore, a peaceful procession quickly turned ugly. Five years later, in May 1969, race riots in Malaysia spilled over to Singapore. They were fuelled by rumours and innuendos and indicative of the mistrust and tense relations between the Malays and the Chinese on the island. The author does not mean for this book to be an academic account of Singapore's race riots. Instead, he has produced an informal, readable and personal recollection of events. He also assesses their implications and consequences, and hopes that present and future generations of Singaporeans will benefit from the important lessons drawn from those difficult times. With references and index.

Joe Conceicao, 85, has in his years of public service, been a teacher, Member of Parliament, and Singapore's Ambassador to Russia and Indonesia, and High Commissioner to Australia.

Since his retirement, which he considers early, as he was only about seventy at that time, he has spent time studying — he ventured into the realm of theological studies and obtained a certificate from the Australian Catholic University. He also spent time writing. His first book in 2004 was an autobiography entitled Flavours of Change. His second book, Indonesia's Six Years of Living Dangerously was published in 2005.

Joe and his wife, Anita, live in Katong, in Singapore.