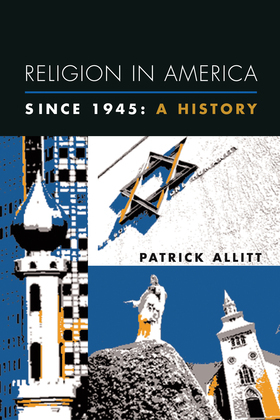 Religion in America Since 1945: A History

by Patrick Allitt (Author)
Nonfiction Religion History of religions History History by country United States
Moving far beyond the realm of traditional "church history," Patrick Allitt here offers a vigorous and erudite survey of the broad canvas of American religion since World War II. Identifying the major trends and telling moments within major denominations and also in less formal religious movements, he asks how these religious groups have shaped, and been shaped by, some of the most important and divisive issues and events of the last half century: the Cold War, the Civil Rights Movement, the Vietnam War, feminism and the sexual revolution, abortion rights, the antinuclear and environmentalist movements, and many others.

Allitt argues that the boundaries between religious and political discourse have become increasingly blurred in the last fifty years. Having been divided along denominational lines in the early postwar period, religious Americans had come by the 1980s to be divided along political lines instead, as they grappled with the challenges of modernity and secularism. Partly because of this politicization, and partly because of the growing influence of Asian, Latino, and other ethnic groups, the United States is anomalous among the Western industrialized nations, as church membership and religious affiliation generally increased during this period. Religion in America Since 1945 is a masterful analysis of this dynamism and diversity and an ideal starting point for any exploration of the contemporary religious scene.