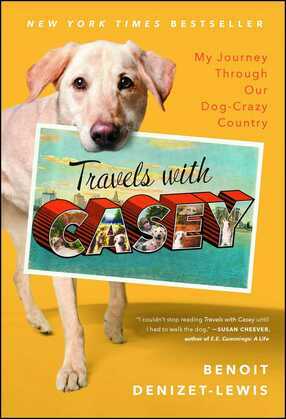 ?I don?t think my dog likes me very much,? New York Times Magazine writer Benoit Denizet-Lewis confesses at the beginning of his cross-country journey with his nine-year-old Labrador-mix, Casey. Over the next four months, thirty-two states, and 13,000 miles in a rented motor home, Denizet-Lewis and his lovable, moody canine companion try?with humorous and touching results?to pay tribute to the most powerful interspecies bond there is, in the country with the highest rate of dog ownership in the world.

On the way, Denizet-Lewis??a master at effortlessly weaving bits of research into his narrative? (Los Angeles Times)?meets an irresistible cast of dogs and their dog-obsessed humans. Denizet-Lewis and Casey hang out with wolf-dogs in Appalachia, enter a dock-jumping competition in Florida, meet homeless teens and their dogs in Washington, sleep in a Beagle-shaped bed and breakfast in Idaho, and visit ?Dog Whisperer? Cesar Millan in California. And then there are the really out there characters: pet psychics, dog-wielding hitchhikers, and two women who took their neighbor to court for allegedly failing to pick up her dog?s poop.

Denizet-Lewis?s memoir ?is a lot like Casey?fun, sweet, and a little neurotic? (Chicago Tribune)?a delightfully idiosyncratic blend of memoir and travelogue coupled with a sociological exploration of a dog-obsessed America. Travels With Casey is ?a thoroughly engaging and often hilarious investigation of the therapeutic nature of our relationships with dogs? (Booklist).