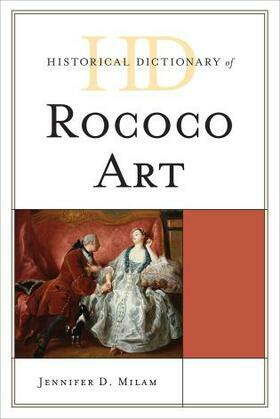 The Rococo emerged in France around 1700 as a playful revolt against the grandeur of the Baroque and the solemnity of Classicism. It flourished during the reign of Louis XV and began to go out of fashion in the second half of the 18th century. During this brief period of less than a century, it spread throughout the courts and cities of Europe, with significant regional variations on the style developing in Bavaria, Potsdam, Venice, and Great Britain. The period produced an extraordinary number of artistic innovators, who challenged received conventions, developed novel subject categories, and eroded hierarchical distinctions between the arts.

The Historical Dictionary of Rococo Art covers all aspects of Rococo art history through a chronology, an introductory essay, a review of the literature, an extensive bibliography, and over 350 cross-referenced dictionary entries on prominent Rococo painters, sculptors, decorative artists, architects, patrons, theorists, and critics, as well as major centers of artistic production. This book is an excellent access point for students, researchers, and anyone wanting to know more about Rococo art.