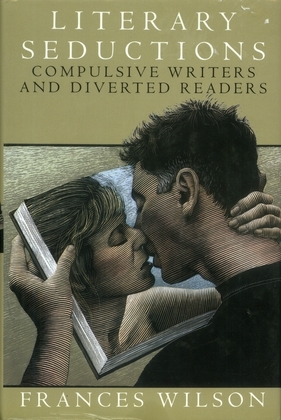 We have all surrendered ourselves to the world that writing creates. Eudora Welty once observed that her mother read the works of Charles Dickens in the same spirit with which she would have eloped with him. Some of us remember our first novel with more pleasurable vividness than our first kiss. Many of us go to on-line chat rooms, looking for love with our keyboard. And most of us have tried to seduce with words--reciting that Shakespeare sonnet or composing that Valentine's Day poem with tremulous hope. All writing seeks to ensnare the reader in its embrace.

As Frances Wilson also proves in this engaging, enlightening, and provocative new book, writing can also ensnare the writers themselves. Highlighting the lives and loves of celebrated literary couples, Literary Seductions reveals the depth of their passion for language--their own as well as their partner's. Taking as a point of departure the legendary courtship of Robert Browning and Elizabeth Barrett, a courtship conceived on the printed page, Wilson explores how easily, how seductively, literary desire becomes sexual desire and vice versa. "Literary seductions," she writes, are "violent, extreme, and irreversible." Not all reading seduces, not all writing inflames. But when they do, what is written ceases to be merely an arrangement of symbols on a page. The word has been made flesh.

Lady Caroline Lamb and Lord Byron, Anaïs Nin and Henry Miller, Laura Riding and Robert Graves, Osip and Nadzheda Mandelstam, W. B. and Georgie Yeats were all in the grip of a compulsion for writing and reading, enmeshed in words. Miller called his relationship with Nin, a "literary fuck-fest"; for Riding and Graves, it took on the self-destructive (and self-conscious) melodrama of a Russian novel; for the Mandelstams, it was a life-giving (if self-sacrificing) bond in a precarious world; for George and W. B. Yeats, it offered sexual stimulus. The couplings of verbs and nouns do more than precede coupling; they comprise it.

Literary Seductions is itself a seductive book. The elegant power of Wilson's arguments, the rigor of her research, and the delights of her prose enthrall the reader. Here is intellectual engagement and readerly pleasure rolled into one.