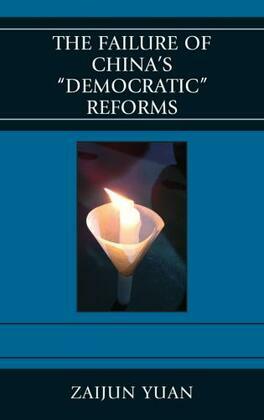 The Failure of China's Democratic Reforms

In its propaganda, the Chinese Communist Party does not deny the value of “democracy”, but it insists that democracy in China can be only “socialist democracy with Chinese characteristics”. The most essential nature of such “democracy” is that it is under the single-party system and it excludes multi-party politics and competitive elections. In recent years, “Chinese democracy” has won more support because of achievements the party has made in developing economy. This raises a question: does this “efficient” authoritarian political system in China, even if it is not democratic, deserve applause because it can facilitate economic development? The party also insists that it is “democratic”. But, is the party's theory of “democracy” compatible with western democracy?

Since 1998, the party has organized some political reforms, such as “direct elections” for township executives, “direct elections” for township party secretaries, township party congress reform and “deliberative democracy” experiments, while maintaining single-party politics. In the party's propaganda, some of these reforms have become party achievements in improving “socialist democracy with Chinese characteristics”. In addition to these four kinds of party-organized reforms, another “reform” originated from the grassroots, the participation of independent candidates in a few local people's congress elections.

This book examines these five local political reforms. It demonstrates that the four reforms instigated and organized by the party were tightly controlled and manipulated by the party. Although some reform measures may possibly liberalize parts of China's political mechanism, it is highly unlikely that the four reforms will eventually lead to political democratization in China. In the fifth “reform”, which was motivated from outside the bureaucratic system, the party took drastic measures to repress the political participation of grassroots power. As a result, nearly all independent candidates in the local people's congress elections failed in their attempts to gain office. The prospects for this “reform” are also poor. The book argues that all five reforms have failed and that none will lead to China’s democratization in the near future. The book concludes that the party’s authoritarian regime in China is by nature anti-democratic and that so-called “socialist democracy with Chinese characteristics” is not democratic.