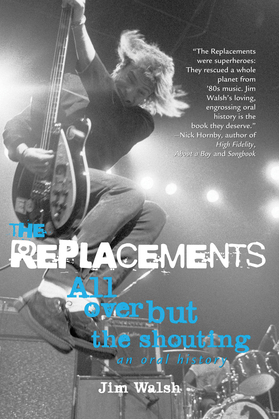 by Jim Walsh (Author)
Excerpt
Nonfiction Arts Music History & criticism
warning_amber
One or more licenses for this book have been acquired by your organisation details
EPUB
Unlimited loans, One at a time
Details

Formed in a Minneapolis basement in 1979, the Replacements were a notorious rock ’n’ roll circus, renowned for self-sabotage, cartoon shtick, stubborn contrarianism, stage-fright, Dionysian benders, heart-on-sleeve songwriting, and—ultimately—critical and popular acclaim. While rock then and now is lousy with superficial stars and glossy entertainment, the Replacements were as warts-and-all “real” as it got.

In the first book to take on the jumble of facts, fictions, and contradictions behind the Replacements, veteran Minneapolis music journalist Jim Walsh distills hundreds of hours of interviews with band members, their friends, families, fellow musicians, and fans into an absorbing oral history worthy of the scruffy quartet that many have branded the most influential band to emerge from the ’80s.  Former manager Peter Jesperson, Paul Stark and Dave Ayers of Twin/Tone Records, Bob Mould and Grant Hart of rivals Hüsker Dü, the legendary Curtiss A, Soul Asylum’s Dan Murphy, Lori Barbero of Babes in Toyland, R.E.M.’s Peter Buck, power-pop hero Alex Chilton, Craig Finn of The Hold Steady, and replacement Replacements Slim Dunlap and Steve Foley:  all have something to say about the scene that spawned the band.  These and dozens of others offer insights into the Replacement’s workings--and the band’s continuing influence more than fifteen years after their breakup.  Illustrated with both rarely seen and classic photos, this, finally, is the rollicking story behind the turbulent and celebrated band that came on fast and furious and finally flamed out, chronicled by one eyewitness who was always at the periphery of the storm, and often at its eye.

“[T]his consistently engaging and poignant work . . . . [is a] loving, appropriately ramshackle tribute to one of the most beloved rock-and-roll bands of the 1980s. . . . The band's story is an archetype of the joys and pitfalls of underground success.”--Publishers Weekly

“The Replacements were superheroes:  They rescued a whole planet from ’80s music.  Jim Walsh’s loving, engrossing oral history is the book they deserve.”—Nick Hornby, author of High Fidelity