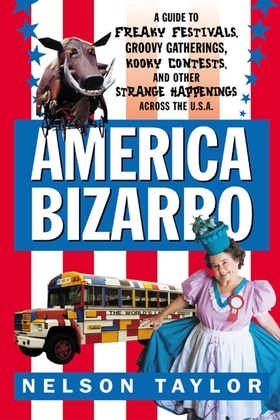 Do you breed rats and mice that could preen like poodles in a pet show? Have creative juices yearning to be set loose on a 20-ton block of packed snow? Possess a melodious voice best suited to singing the praises of SPAM? Nope? That's okay, with America Bizarro, you can find out all about people who do!

It's a weird place, America, and even if you have a hobby or interest that no one you know shares, there's probably a group of people meeting somewhere in America to enjoy it together. Not only that, but someone else's obsession or bizarre display of civic pride is being celebrated right near you. Organized state-by-state, and illustrated with some pretty funny pictures, Nelson Taylor's America Bizarro is an hysterical armchair read which doubles as a practical guide in case you want to:

See the Jumping Frog competition immortalized by Mark Twain in Calaveras County, CA
Be a delegate at the Dukes of Hazzard Fan Club Convention
Munch on Rocky Mountain oysters at Montana's Testicle Festival
Get lost in Grandpa John's Amazing Maze in a Nebraska cornfield
Tickle, caress, and seduce the ivories in Las Vegas' Liberace "Play-A-Like" Competition
Join Polar Bear plungers in the Atlantic in February at the Jersey Shore
Win a truck in Texas' famous Hands on a Hardbody contest

You never know. You could be the next International Pack Burro Race champion or just enjoy taking in the annual ArtCar Parade in San Francisco. America is what you make it, so make it Bizarro!