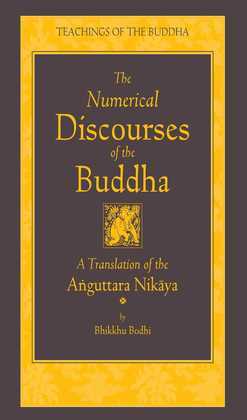 The Numerical Discourses of the Buddha

Like the River Ganges flowing down from the Himalayas, the entire Buddhist tradition flows down to us from the teachings and deeds of the historical Buddha, who lived and taught in India during the fifth century B.C.E. To ensure that his legacy would survive the ravages of time, his direct disciples compiled records of the Buddha's teachings soon after his passing. In the Theravada Buddhist tradition, which prevails in Sri Lanka and Southeast Asia, these records are regarded as the definitive "word of the Buddha." Preserved in Pali, an ancient Indian language closely related to the language that the Buddha spoke, this full compilation of texts is known as the Pali Canon.

At the heart of the Buddha's teaching were the suttas (Sanskrit sutras), his discourses and dialogues. If we want to find out what the Buddha himself actually said, these are the most ancient sources available to us. The suttas were compiled into collections called "Nikayas," of which there are four, each organized according to a different principle. The Digha Nikaya consists of longer discourses; the Majjhima Nikaya of middle-length discourses; the Samyutta Nikaya of thematically connected discourses; and the Anguttara Nikaya of numerically patterned discourses.

The present volume, which continues Wisdom's famous Teachings of the Buddha series, contains a full translation of the Anguttara Nikaya. The Anguttara arranges the Buddha's discourses in accordance with a numerical scheme intended to promote retention and easy comprehension. In an age when writing was still in its infancy, this proved to be the most effective way to ensure that the disciples could grasp and replicate the structure of a teaching.