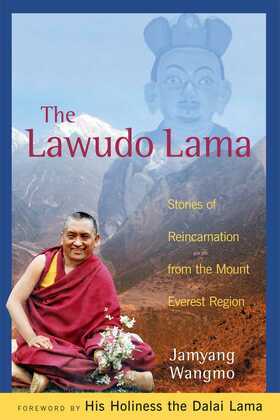 The Lawudo Lama presents two life stories along with an extended introduction laying out their social and cultural context. It takes place in the Mount Everest region of Nepal, the home of the famous Sherpa guides, where the people practice Tibetan Buddhism and revere the local lamas and yogis. The stories are centered in Lawudo, a small village in the Khumbu region, and the central figure is the renowned Lawudo Lama.

The first Lawudo Lama portrayed, Lama Kunzang Yeshe (1864-1946), was a yogi of the Nyingma lineage who spent much of his life meditating in a cave near Lawudo, and his life is reconstructed through meticulous research of written and oral histories. The second story is of Kunzang Yeshe's reincarnation, a monk of the Gelug lineage known as Lama Zopa Rinpoche, whose story is given in a first-person narrative. Lama Zopa is well known in the West as the author of several books and as the Spritual Director of the Foundation for the Preservation of the Mahayana Tradition (FPMT), which has more than 100 affiliate Buddhist centers worldwide. Lama Zopa Rinpoche travels and teaches extensively to large audiences and has thousands of students.

The Lawudo Lama will appeal to travelers to Nepal, to Buddhist practitioners, and to scholars trying to understand the culture of the region. It is well documented, and is accompanied by more than 125 color and black and white photos, drawings, lineage charts, and maps.