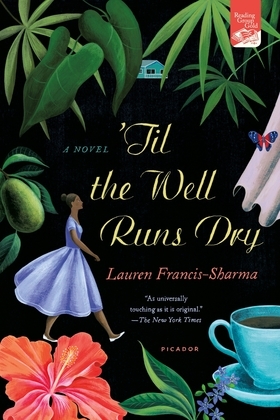 'Til the Well Runs Dry

"As universally touching as it is original." -The New York Times

A glorious and moving multigenerational, multicultural saga that sweeps from the 1940s through the 1960s in Trinidad and the United States.

In a seaside village in the north of Trinidad, young Marcia Garcia, a gifted and smart-mouthed sixteen-year-old seamstress, lives alone, raising two small boys and guarding a family secret. When she meets Farouk Karam, an ambitious young policeman (so taken with Marcia that he elicits help from a tea-brewing obeah woman to guarantee her ardor), the rewards and risks in Marcia's life amplify forever.

'Til the Well Runs Dry sees Marcia and Farouk from their sassy and passionate courtship through personal and historical events that threaten Marcia's secret, entangle the couple and their children in a tumultuous scandal, and put the future in doubt for all of them.

With this deeply human novel, Lauren Francis-Sharma gives us an unforgettable story about a woman's love for a man, a mother's love for her children, and a people's love for an island rich with calypso and Carnival, cricket and salty air, sweet fruits and spicy stews-a story of grit, imperfection, steadfast love and of Trinidad that has never been told before.