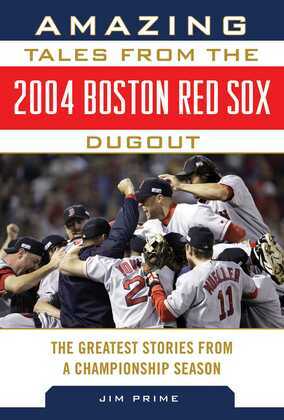 Amazing Tales from the 2004 Boston Red Sox Dugout is a different kind of look back at the incredible championship seasonthrough the eyes of the players involved. It is packed full of anecdotes, quotes, and perspectives from each member of the team, presented in the context of their on-field heroics. The book includes intimate snapshots of particularly relevant momentsrare glimpses behind the scenesin order bring you back to the moment. This was a group of bona fide characters who showed great character in facing every challenge put before themincluding overcoming a three games to none deficit in the ALCS against their archrivals.

The season had more than its share of the humorous, the poignant, and the downright weird. Thanks to an unconventional and irreverentbut effectiveapproach to the game, the underdog 2004 Red Sox captured the imagination of New England and the entire nation. In their quixotic quest, they defied an ancient curse and slew the hated Yankees en route to the October Classic and a meeting with the St. Louis Cardinals.

Amazing Tales from the 2004 Boston Red Sox Dugout is a personal and informal look at the first Red Sox team to win a World Series championship in 86 frustrating years. Like the team itself, it is quirky; but also like the team, it is a winner.