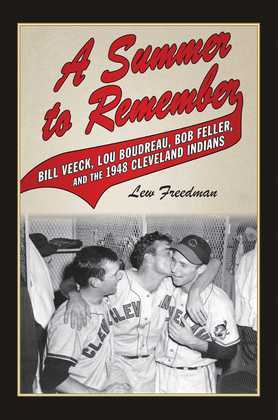 A Summer to Remember

While the Cleveland Indians are known lately more for being cellar dwellers than world champions, that wasn?t the case in 1948. Ranked by the Sporting News as the ninth-best team in baseball history, the ?48 Indians were a colorful group of guys, led by the always colorful Bill Veeck, the future Hall of Famer who was running his first team. But the Indians weren?t just well run in the front office; their team on the field was comprised of seven future Hall of Famers.

Player-manager Lou Boudreau would not only lead his team to the playoffs, but would also become the first shortstop to ever win the American League?s Most Valuable Player award. He also relied on pitchers Bob Feller, Bob Lemon, and Negro leagues legend Satchel Paige (then forty-one years old), as well as second baseman Joe Gordon and right fielder Larry Doby, who followed Jackie Robinson by only a few weeks in breaking the color barrier in baseball.

The Indians finished the ?48 season at 9758 and were tied with Joe McCarthy?s Boston Red Sox, which led to the first-ever one game playoff in American League history. The Indians were victorious and would then defeat the Boston Braves in six games to win the World Series.

The Monsters of Municipal Stadium is a fantastic look at one of the greatest teams ever to play the game, and at how everyone involved in this extraordinary seasonfrom the players to managementmade 1948 a memorable year for baseball and the city of Cleveland.