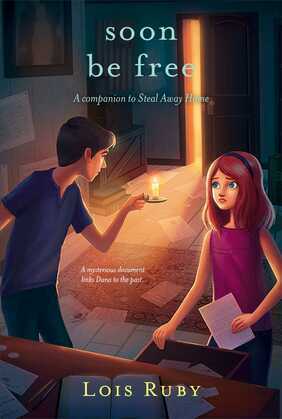 I ask you, why do weird things always happen to me?
Thirteen-year-old Dana Shannon is no stranger to intrigue. Not long ago she discovered a skeleton behind a wall in her family's house -- a house in Lawrence, Kansas, that was once owned by a Quaker family, the Weavers. The diary Dana found in the sealed-off room revealed that the skeleton belonged to a runaway slave named Lizbeth Charles.
Now Dana's house is a newly refurbished bed-and-breakfast, and the first guests are two shady characters who believed the house is hiding another secret. When Dana gets in their way, she becomes embroiled in a second mystery, this one involving slaves and the Weavers again, and -- somehow - Delaware Indians.
As Dana tried to fit the puzzle pieces together, alternate chapters tell the story of James Baylor Weaver, a thirteen-year-old boy, in 1857. It is up to James to fulfill a promise Lizbeth made before her death. He must travel hundreds of miles to retrieve four slaves and bring them to freedom. The journey will test his strength, endurance, and courage; it will also test his character, when he has to make a terrible choice...
Readers of Soon Be Free will quickly be caught up in this fast-paced mystery-adventure that links teenagers from two different centuries.