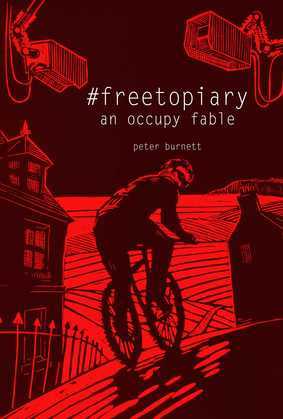 In an age of NSA spying and unprecedented government oversight, young Alan Stewart wants nothing to do with changethat is until he is arrested for a crime he didn?t commit, and forced to face reality.

Consumerism, passivity, apathy and distraction. The internet is no place to attempt changing anything that matters. A young Scottish drifter, Alan Stewart, struggles to come of age in a world he knows only through the world wide web. But come of age he does, learning something of truth and the price of freedom along the way. Arrested for a cybercrime he did not commit, Alan is shipped to Scotland's e-crime unit in Aberdeen with a young hacktivist known only as Topiary. After an escape worthy of The 39 Steps they set about establishing a Scottish Occupy camp, along with others who feel that social inequalities are rising to historically unprecedented heights.

Introduced to the story of Bradley Manning, Alan is forced to question his long-held political apathy and ask himself what he is prepared to do for the struggle. Another world is possible. Make ready your dreams. Inspired in part by a true story, #freetopiary is not just an insightful commentary on internet privacy and our rights in a world increasingly dependent on technology, but the touching story of a brotherhood and the bonds we develop in times of crisis.