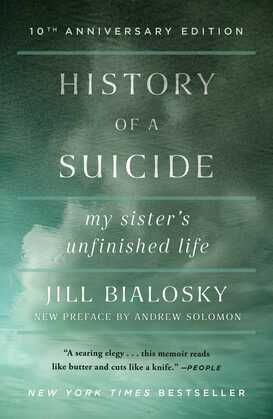 History of a Suicide

On the night of April 15, 1990, Jill Bialosky?s twenty-one-year-old sister Kim came home from a bar in downtown Cleveland. She argued with her boyfriend on the phone. Then she took her mother?s car keys, went into the garage, closed the garage door. She climbed into the car, turned on the ignition, and fell asleep. Her body was found the next morning by the neighborhood boy her mother hired to cut the grass.

Those are the simple facts, but the act of suicide is anything but simple. For twenty years, Bialosky has lived with the grief, guilt, questions, and confusion unleashed by Kim?s suicide. Now, in a remarkable work of literary nonfiction, she re-creates with unsparing honesty her sister?s inner life, the events and emotions that led her to take her life on this particular night. In doing so, she opens a window on the nature of suicide itself, our own reactions and responses to it?especially the impact a suicide has on those who remain behind.

Combining Kim?s diaries with family history and memoir, drawing on the works of doctors and psychologists as well as writers from Melville and Dickinson to Sylvia Plath and Wallace Stevens, Bialosky gives us a stunning exploration of human fragility and strength. She juxtaposes the story of Kim?s death with the challenges of becoming a mother and her own exuberant experience of raising a son. This is a book that explores all aspects of our familial relationships?between mothers and sons, fathers and daughters?but particularly the tender and enduring bonds between sisters.

History of a Suicide brings a crucial and all too rarely discussed subject out of the shadows, and in doing so gives readers the courage to face their own losses, no matter what those may be. This searing and compassionate work reminds us of the preciousness of life and of the ways in which those we love are inextricably bound to us.