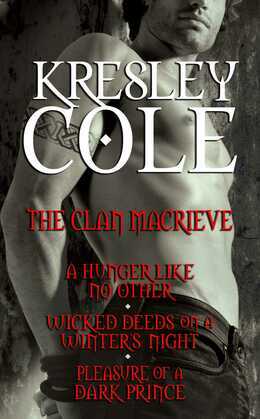 Kresley Cole Immortals After Dark: The Clan MacRieve: A Hunger Like No Other, Wicked Deeds on a Winter's Night, Pleasure of a Dark Prince

?The Clan MacRieve collection is a perfect intro for readers new to the Immortals After Dark Series. If you haven?t tried Kresley Cole?s scorching paranormal tales, now?s your chance to be swept away!?
- Gena Showalter, New York Times bestseller

In this sizzling Immortals After Dark collection, bestselling author Kresley Cole delves deep into the sensual but dangerous world of the Lykae, a Highland clan of werewolves.

The mighty king: In A Hunger Like No Other, Lachlain MacRieve will stop at nothing to capture his ethereal vampire mate and make her his queen. As passion burns between them, can the tormented beast win the gentle beauty?s heart?

The ruthless warrior: In Wicked Deeds on a Winter?s Night, Bowen MacRieve must protect his former enemy, a  vulnerable young witch whose breathless kiss haunts him. He?ll demand her body and soul, and no deed is too wicked for her seduction.

The fierce prince: In Pleasure of a Dark Prince, Garreth MacRieve aches to claim the Valkyrie archer he?s long coveted from afar. But when his need for her reaches a feverpitch, will the proud huntress dare surrender to his uncontrollable desires?