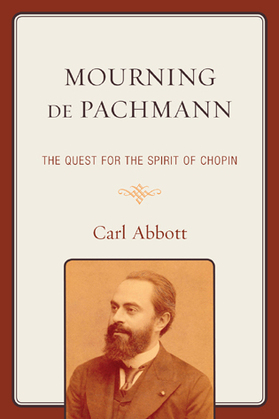 In January 1933, widowed Canadian psychiatrist Charles Flemming traveled to Rome to deliver a paper at an international psychiatric meeting and to further research the career of the eccentric Ukranian pianist, Vladimir de Pachmann, for a biography he has always wanted to write. En route, he learns of a young, virtually blind Polish pianist, Agnieszka Lipska, who will be giving several recitals in Rome. She has familial retinitis pigmentosa and her specialty is the music of Chopin. Charles and Agnieszka are introduced by Simon Williams, a music critic assigned to review the recitals. Her beauty and talent enraptures the heart of the lonely doctor and a romance develops. Shortly after arriving in Rome, Charles discovers that a manuscript containing aspects of de Pachmann’s life has been stolen from his hotel. This along with other complications, including a near-drowning in the Tiber River, ultimately involves the scrutiny of Mussolini’s fascist police. At her final recital, Agnieszka resists the restrictions of the government by playing the Polish National Anthem as an encore disguised as an anonymous Polish mazurka. However, a music critic recognizes the piece and the lovers are forced to flee Rome with the help of the Polish ambassador. They travel to Kraków, where Charles meets Agnieszka’s family. Before leaving there is concern over Agnieszka’s abdominal pain, which appears to require gynecologic surgery. On his ship back to Canada, Charles opens and reads a disturbing letter written by Agnieszka’s mother about her daughter’s past – a suppressed memory. The truth is revealed later on his return to Toronto.

Written for a mature audience with interests in music, history and mystery, Mourning de Pachmann investigates the subtleties of love, guilt and forgiveness, ambition and ego, as well as the rewards of a personal adventure of a lonely, middle-aged man and a younger woman. In this historical novel the reader will learn much about the career of the real-life de Pachmann, who still mystifies musicologists and critics; life in fascist Italy where it is illegal to sell condoms and dangerous to deny the wishes of Il Duce, Benito Mussolini; and Europe on the verge of another world war.