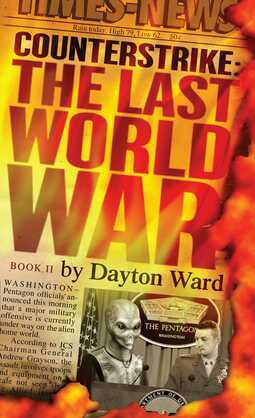 When the alien war engulfing a distant planet spilled to Earth through a network of hidden portals, humankind was plunged into an apocalyptic, generations-old conflict between the Plysserians and the Chodrecai. Now, months after Earth's most powerful military forces formed a tenuous alliance with the Plysserians and countered a devastating, three-pronged Chodrecai offensive, alien survivors continue to wreak havoc on a shell-shocked Earth. Martial law and civil unrest run rampant. Resistance cells and pockets of Chodrecai sympathizers are gathering strength. And two U.S. Marines--Sergeant Major Simon DiCarlo and Sergeant Belinda Russell-- remain trapped on the alien planet of Jontashreena.

Now, as human and Plysserian scientists and engineers race to unlock the intergalactic portals and harvest alien technology, Earth prepares for the most explosive battle for its existence. Joining the war effort are recruits like young Colin Laney, who will advance from Marine boot camp to the forefront of a massive invasion on alien terrain--with the fate of two worlds hanging in the balance.