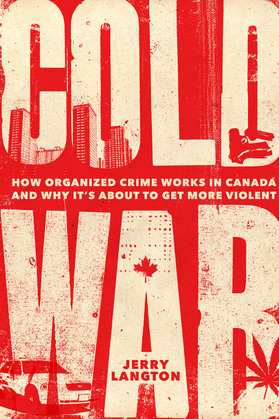 Organized crime in Canada has long been dominated by the Hells Angels and their friends in the Rizzuto crime family. Over the years, they have brought many street gangs into their alliance, most notably the Indian Posse, many sets of the Crips, the Independent Soldiers and the Red Scorpions. The key to their allegiance is that the Hells Angels and the Rizzutos could always get the commodities—marijuana, cocaine, meth, Ecstasy, cash, steroids—that fed organized crime. But their strong-arm tactics have created an opposition including the Cotroni family, the Musitanos, the Outlaws, the Bandidos, the Rock Machine—all less familiar names to Canadians. And the opposition is now standing up to the stalwart Canadian kingpins. Canada’s crime families, bikers and youth gangs are waging a war for supremacy across the country, and innocent people often get in the way.

In Cold War, bestselling author Jerry Langton explains the history of the rivalries, the current tensions and the build-up of anti–Hells Angels/Rizzuto family forces in Canada. In unprecedented detail, Langton outlines the risk and the fallout of Canada’s true-crime cold war.