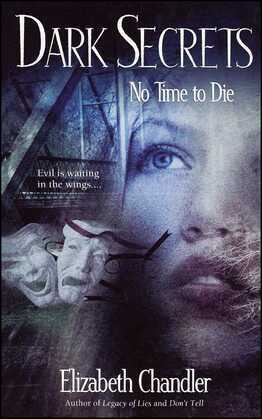 No Time to Die

Message from a dead girl...

It's too late to call back. Jenny will never speak to Liza again. But it seems that even from beyond the grave, Liza is begging her sister for help....

They say it's a serial killer. Is it? Jenny can't afford to trust anyone. Now she's here, in Wisteria, anonymously registered at the Chase College theater camp where her sister died. The daughter of a famous theatrical family, Jenny distrusts actors, loathes acting. Yet here in the college's darkened theatre, Liza seems to be speaking to her. Suddenly Jenny is mouthing Liza's last lines, sharing Liza's last days, a drama starring Brian, the stage manager, who seems to follow her everywhere...dangerously attractive Mike...Paul, who was obsessed with Liza...motherly, suffocating assistant director Maggie...and Walker, the director, bristling with hostility and resentment against Liza and Jenny's famous father. Does he suspect Jenny's true identity?

How can anyone know the visions that may be driving Jenny straight into the killer's arms?