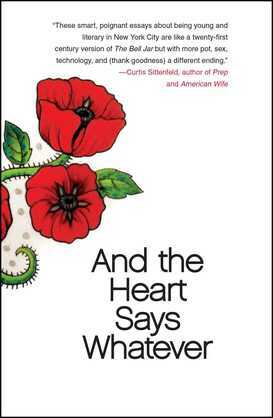 And the Heart Says Whatever

Essays by former editor of Gawker.com--and the new female voice of her generation.  In And the Heart Says Whatever, Emily Gould tells the truth about becoming an adult in New York City in the first decade of the twenty-first century, alongside bartenders, bounty hunters, bloggers, bohemians, socialites, and bankers. These are essays about failing at pet parenthood, suspending lust during the long moment in which a dude selects the perfect soundtrack from his iTunes library, and leaving one life behind to begin a new one (but still taking the G train back to visit the old one sometimes).

For everyone who has ever had a job she wishes she didn't, felt inchoate ambition sour into resentment, ended a relationship, regretted a decision, or told a secret to exactly the wrong person, these stories will be achingly familiar.   At once a road map of what not to do and a document of what's possible, this book heralds the arrival of a writer who decodes the new challenges of our post-private lives, and the age-old intricacies of the human heart.