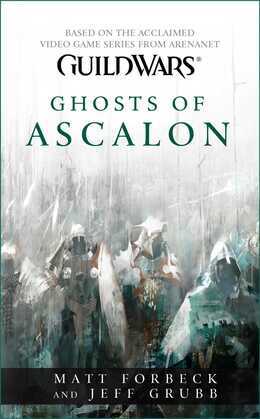 Desperate to defend his land from advancing hordes of bestial charr, King Adelbern summoned the all-powerful Foefire to repel the invaders. But magic can be a double-edged sword--the Foefire burned both charr and human alike. While the charr corpses smoldered, the slain Ascalonians arose again, transformed by their king's rage into ghostly protectors and charged with guarding the realm . . . forever. The once mighty kingdom became a haunted shadow of its former glory.

Centuries later, the descendants of Ascalon, exiled to the nation of Kryta, are besieged on all sides. To save humankind, Queen Jennah seeks to negotiate a treaty with the hated charr. But one obstacle remains. The charr legions won't sign the truce until their most prized possession, the Claw of the Khan-Ur,is returned from the ruins of fallen Ascalon.

Now a mismatched band of adventurers, each plagued by ghosts of their own, sets forth into a haunted, war-torn land to retrieve the Claw. Without the artifact, there is no hope for peace between human and charr--but the undead king who rules Ascalon won't give it up easily, and not everyone wants peace!