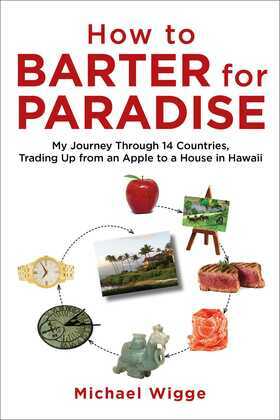 How to Barter for Paradise

Most people like to travel in comfort: they stay in fancy hotels, never leave tourist spots, and stay away from the locals. Michael Wigge isn?t like most people, though. After travelling the world without money for 150 days while writing How to Travel the World for Free, his next challenge: turn an apple into a house in Hawaii.

Wigge goes around fourteen countries and six continents exchanging goods for more valuable ones, and he meets an array of good-humored people who take his deals. Taking on his Barterman persona, he trades the apple for sixteen cigarettes in Germany; a couple of trades later in India, he fixes up a motorized rickshaw and trades it for silk; in Australia, a millionaire amuses himself by offering him an art piece for the silk if Wigge feeds a wild crocodile. Finally, he arrives in Hawaii armed with two bicycles, a surfboard, Portuguese porcelain, three solid-gold coins, a Porsche wristwatch, a record by musician Coati Mundi and accompanying contract for 25 percent of the proceeds from his next single, a voucher for a two-night stay in a mansion in L.A., and a piece of original artwork by painter Alex Stenzel?now he just has to find someone to give him a house in exchange.

On the 200-day journey around the world, Wigge makes forty-two trades and meets strange, kind, funny, friendly, eccentric, and good-natured people who help him in his quest. It?s a journey you won?t want to miss!