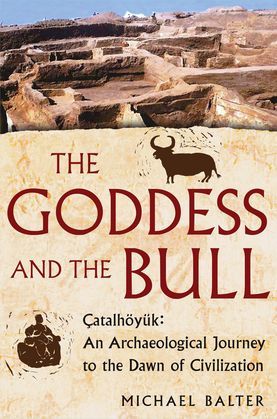 The Goddess and the Bull

Thousands of years before the pyramids were built in Egypt and the Trojan War was fought, a great civilization arose on the Anatolian plains. The Goddess and the Bull details the dramatic quest by archaeologists to unearth the buried secrets of human cultural evolution at this huge, spectacularly well-preserved 9,500-year-old village in Turkey.

Here lie the origins of modern society -- the dawn of art, architecture, religion, family -- even the first tangible evidence of human self-awareness, the world's oldest mirrors. Some archaeologists have claimed that the Mother Goddess was first worshipped at Çatalhöyük, which is now a site of pilgrimage for Goddess worshippers from all over the world. The excavations here have yielded the seeds of the Neolithic Revolution, when prehistoric humans first abandoned the hunter-gatherer life they had known for millions of years, invented farming, and began living in houses and communities.

Michael Balter, the excavation's official biographer, brings readers behind the scenes, providing the first inside look at the remarkable site and its history of scandal and thrilling scientific discovery. He tells the very human story of two colorful men: British archaeologist James Mellaart, who discovered Çatalhöyük in 1958 only to be banned from working at the site forever after a fabulous ancient treasure disappeared without a trace; and Ian Hodder, a pathbreaking archaeological rebel who reinvented the way archaeology is practiced and reopened the excavation after it had lain dormant for three decades. Today Hodder leads an international team of more than one hundred archaeologists who continue to probe the site's secrets.

Balter reveals the true story behind modern archaeology -- the thrill of history-making scientific discovery as well as the crushing disappointments, the community and friendship, the love affairs, and the often bitter rivalries between warring camps of archaeologists.

Along the way, Balter describes the cutting-edge advances in archaeological science that have allowed the team at Çatalhöyük to illuminate the central questions of human existence.